How Is Liquid Waste Treated? It’s All About Biology

As part of our ongoing series explaining the wastewater treatment process, we’ve discussed how solids are removed from wastewater, how we use waste to create energy, what happens to the byproducts of treatment, and even what happens to things that should not be flushed.

Now we’re going to explain what happens to the liquid waste: everything left over after solids are removed during primary treatment. This includes urine, household cleaners, water, toothpaste, even soda dumped in the sink — basically, anything liquid that goes down the drain. This phase, called secondary treatment, relies on a biological process to remove the dissolved and colloidal (microscopic) particles remaining in the wastewater.

These two filters are covered in something called a zoogleal film. No, it’s not a substance expelled by an alien from “Men in Black: International.” It’s a type of slime made up of a community of bacteria, fungi and protozoa — all microorganisms that feed on waste. As wastewater trickles over the filters, the zoogleal film gets to work. In the process, it multiplies, creating even more microorganisms that feed on waste. 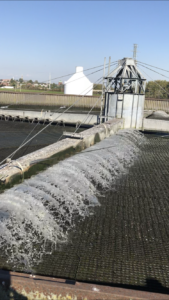 Wastewater is pumped over the top of the Plastic Media Trickling Filters.

First, the water is pumped to the top of — and flows down through —four Plastic Media Trickling Filters that are 100 feet in diameter and 32 feet deep. The filter media consists of polyvinyl chloride (PVC) sheets that have been fused into blocks. The blocks are stacked 18 layers high in each filter. As you can see from the main photo, above, each one looks like a huge honeycomb. There’s a total of one million cubic feet of plastic blocks, which provide 27 million square feet of total surface area upon which those waste-eating microorganisms attach and grow to form the zoogleal film, or slime.

As the slime works its magic, it absorbs and begins metabolizing the waste — turning it into carbon dioxide, water and new microorganisms. It takes just 45 seconds to a minute for the slime to treat the wastewater — just long enough for it to trickle through! Some of the waste absorbed by the zoogleal film takes longer to break down, but eventually it’s all metabolized.

Eventually, as the slime grows and waste is absorbed, the film of waste and microorganisms gets thick enough for some to slough off the filters. It drops to the bottom of the filter system, and is pumped off to the Intermediate Settling Tanks. 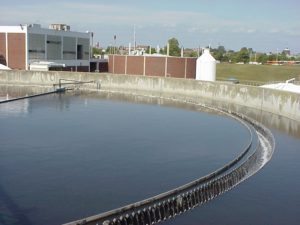 One of three intermediate settling tanks at the Kline’s Island Wastewater Treatment Plant.

These three tanks — each circular and 138 feet in diameter — allow for separation of solids. The biological solids that settle are scraped to the center of the tank by a collector mechanism, then removed on a continuous basis by a gravity feed system. Floating solids (for the most part sludge, insect larvae and snail shells) are removed from the surface of the tanks by skimmer arms and returned to the plant headworks for treatment.

Now that soluble and colloidal organic wastes have been removed, the wastewater is considered to have undergone secondary treatment. But there’s one more step: tertiary nitrification, which is where the Rock Media Trickling Filters come in. We’ll talk about that in our next Behind the Scenes post.

For the rest in our Behind the Scenes series, please see:

Wastewater Treatment Starts with Screening Out Items That Don’t Belong

Why Does Wastewater Need to be Treated?

Pump it Up: The Role of LCA’s Giant Wastewater Movers

Clean and Green: How Waste is Turned into Energy at Kline’s Island

Sludge 101: How Solids Are Removed From Wastewater

The Sludge Report: What Happens After Treatment?

Tertiary Nitrification: How Ammonia Is Removed From Wastewater

Disinfection and Testing — the Final Steps in Wastewater Treatment