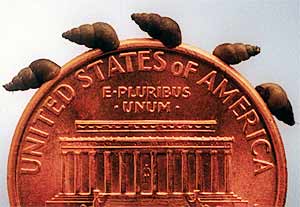 The Pennsylvania Fish and Boat Commission (PFBC) is asking anglers and boaters to help prevent the spread of an invasive species, the New Zealand Mudsnail, by cleaning their gear after leaving one waterway and before entering another.

PFBC biologists collected mudsnail specimens this month in the Little Lehigh Creek west of Emmaus, near the Wildlands Conservancy.

The snails are tiny — measuring less than one-quarter inch — “with a relatively long, narrow, spiral shell that is generally brown to almost black in color. Like other aquatic invasive species, they disrupt ecosystems by rapidly multiplying and competing with native species for space and food,” a PFBC press release states.

“Based on studies conducted in western U.S. streams, if the population grows quickly, they could become the dominant organisms in the benthic – or bottom dwelling – community, upon which many other species depend for food,” says PFBC Lead AIS Ecologist Bob Morgan.

According to the PFBC, the New Zealand Mudsnail was first discovered in the U.S. in the Snake River in Idaho and Wyoming in 1987; in Lake Ontario and the St. Lawrence River in 1991; and in Lake Erie about 4 miles north of Presque Isle Bay in 2007. “Additional populations were found in a small stream near the Niagara River in New York in 2008 and in another Lake Ontario tributary in 2011. New Zealand Mudsnails have recently been found in the Gunpowder River in Maryland and in the Musconetcong River in New Jersey (near Riegelsville, PA) which is a tributary of the Delaware River.”

The first known occurrence of the snail in Pennsylvania was discovered about five years ago in Spring Creek, Centre County.

“Spring Creek and Little Lehigh Creek have at least one thing in common – they are both heavily fished streams, with anglers traveling to them from all over,” Morgan says. “Given the presence of the Mudsnail in other areas of the country, it’s not surprising they have been found here. As with many aquatic invasive species, they are nearly impossible to eradicate once established. This is even more difficult with the Mudsnail because it usually takes only one small snail to be able to produce offspring. But we must do our best to slow its spread to other waters.”

Gear should be visually inspected and any clinging matter should be removed and disposed of in the trash. To kill Mudsnails, three methods are effective. Gear can be frozen for a minimum of eight hours, or it can be soaked in very hot water with detergent – maintained at 120°F to 140°F – for ten minutes. This last method is not recommended for Gortex.

Also, a 2005 study by the California Department of Fish and Game showed that Mudsnails can be killed by soaking gear for five minutes in a one-to-one solution of a commercial product, Formula 409® Cleaner Degreaser Disinfectant, and water. After soaking gear for five minutes, thoroughly rinse it with plain water. Simply spraying gear with the disinfectant or the mixture does not work. Also, general cleaners such as regular off-the-shelf Formula 409 have not been shown to be effective against Mudsnail.

The PFBC asks that if you suspect you have found the New Zealand Mudsnail (or any other invasive species) in another waterway, report your information at: http://pfbc.pa.gov/forms/reportAIS.htm .

For more information about New Zealand Mudsnail, visit https://seagrant.psu.edu/section/fact-sheets-brochures  and scroll down to the Mudsnail link.